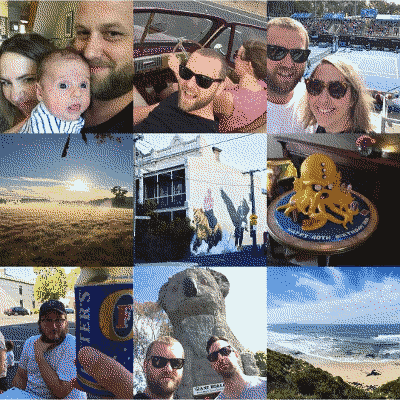 Seems like you can’t swing a cat without hitting someone’s year in review blog post. The world won’t have been screaming out for me to add to the pile, but I wanted to pick something pretty quick and easy to smash out today. Primarily to put the new blogging part of my new site through its paces, but also to try and jump start the habit of writing more frequently.

The redesign and relaunch of this site itself is something that happened in 2017. The source is all at github.com/joho/php, and the relevant PRs are the redesign and adding blog posts. Ever since I saw the first screenshots from Return of the Obra Dinn I’ve been on a big retro dithering kick which naturally pulled my aesthetic all the way back to Encarta ‘93. If you want to have a bit of fun with the look I can highly recommend the BitCam app.

The big thing for the year that obviously dwarfs all the other things was the birth of our child. I’d tell you more about her but we’re trying to keep the number of Google scraped facts about her relatively low because the internet is a toilet that you can never scrub clean. There’s not much I can say about the experience that hasn’t been said better by other people other times. It’s just as bad and as good as everyone says. I cry more than I used to.

Professionally there’s not a lot to publically reflect on. Being in the executive team makes it tricky to carve out your own slice of work from the overall company’s story, and what’s the point of being a private company if you’re not very private about it? I’m really proud of how the engineering leadership is coming along at 99designs but that says far more about their personal qualities than anything I’ve been doing. We’ve made some great junior hires this year which has been great for us and for the broader Melbourne dev community.

Equal marriage has been a big part of the year, on a personal and national scale. We managed to get over the UK this winter for Charlie and Ian’s wedding. It was a lovely occasion and a great trip and a crying shame it had to be on the other side of the planet because it was illegal here. Now that’s all changed too. Despite the completely cack-handed process we’ve finally (re)achieved equal marriage here in Australia. I’m hoping the victory sticks around and the unpleasant memories fade away. I’m also hoping Charlie and Ian move back to Oz and double marry because they’re great and they can.

Bouldering was my big personal discovery this year. It’s the best thing that’s happend for my physical and mental health in years. I’d had an off again, on again love affair with climbing over the years which was mostly stuck to off as I developed a mild fear of heights in my twenties. I love bouldering because it gives me more focused physical and mental challenges without the anxiety of all the open air around me. We even made it out to the inaugural Grampians Bouldering Festival which was a great event and I can’t wait for the next one. I can’t recommend this sport enough if you’re the “noisy brain” type.

No big plans for 2018 as yet other than keeping me, my wife, and my baby happy and healthy. I’d like to give back a bit more into the budding startup tech leadership where I can, especially helping out those coming from underrepresented group. Hit me up for a coffee if you think I could lend you a hand.